WE ARE KICKING OFF LONG BEACH PRIDE WEEKEND THE RIGHT WAY AT THE “COCKTAILS @ SUNSET SOIRÉE” FOR THE LADIES WHO LOVE THE LADIES!!! JOIN

WE ARE KICKING OFF LONG BEACH PRIDE WEEKEND THE RIGHT WAY AT THE “COCKTAILS @ SUNSET SOIRÉE” FOR THE LADIES WHO LOVE THE LADIES!!! JOIN US!!!
This price includes the beautiful venue space of THE GOLDEN SAILS & PCH MARINA CLUB. 2 DRINK VOUCHERS & APPETIZERS, MUSIC, DANCING & WOMEN OF THE

LGBTQ+ COMMUNITY. THIS IS A SAFE SPACE TO BE YOURSELF & CELEBRATE US AS WE ARE!
BONUS BONUS BONUS:
In the SPIRIT of WOMEN supporting Women, if you come to the event with a GALLON ZIPLOC BAGGIE of TOILETRIES that are WOMEN SPECIFIC, you will get a 3RD DRINK VOUCHER for Your Donation.
These donations will be given to a Local Women’s Shelter. #WomenHelpingWomen
The FIRST 50 Tickets purchased on EVENTBRITE using the Promo Code “MamaD33” will get $10 off their ticket price 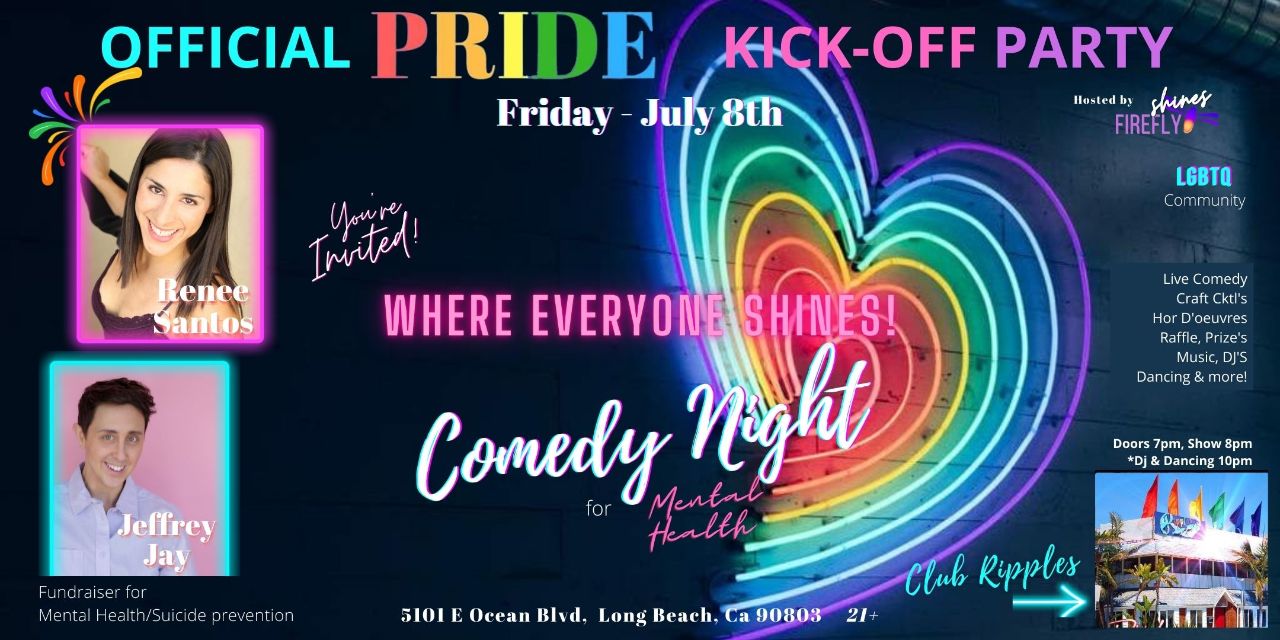 Official pride kick-off party at the ICONIC CLUB RIPPLES, where pride began. Firefly Shines hosts “where everyone shines” comedy night. About this event

SANTOS burst onto the Stand Up comedy scene 8 years ago in her first National Television debut on Showtime Network’s “Pride Comedy Jam”. The Network touts, “a hip and hilarious show with a great ensemble of up and coming diverse comics, including the witty anecdotes of Latina Lesbian comic Renee Santos.” She has been a regular on the Los Angeles comedy scene performing consistently at local clubs, including the Comedy Store, The Laugh Factory, and the Hollywood Improv. She booked a starring role in the show “Stand-up and Deliver” featured on Jennifer Lopez’s new network NuvoTV Tuesday nights. In the fall of 2018, Record Label UPROAR Entertainment, the label responsible for launching the careers of greats Margaret Cho and Richard Pryor. In 2018 her first 1 Hour Comedy Album “Outside the Box” hit iTunes, Amazon, and anywhere you can buy Comedy or Music. In 2019 her Stand-Up Comedy Special “Outside the Box” was picked up by AmazonPRIME.

JAY is the premier transgender comedian and public speaker. He has been seen on the CW, Hulu, nominated for NACA’s Best Diversity Act, has been featured in The Advocate as one of “7 LGBT Comics You Shouldn’t Have Missed, a three time headliner for the Portland Queer Comedy Festival (the world’s largest LGBT comedy festival), a finalist in The Funniest Comic in Texas, and featured at the Bridgetown Comedy Festival.

Tickets available on EVENTBRITE $69 each, At Door $79 each.

S.T.A.Y. – Suicide Talk and You. Please help me bring S.T.A.Y. to life. It’s designed to give people a platform to connect with one another without prejudice, labels or filters. Just real stories that can make a difference in someone’s life today. Our mission is to help prevent suicide by providing people a place to connect, share and/or just listen to other’s experiences in real time. We believe that this can be the difference between life and death in moments need. It’s for all ages all ethnicities all cities’ states and more. It’s about connecting to people live. IRL-In real life. It’s about creating a safe space for anyone that needs support or help.

The space will be live and for anyone that has been touched by suicide thinking about suicide has a friend concerned about suicide or even just wants to understand more about what suicide is. Everyone is welcome to STAY.

Suicide Talk and You Inc. has been submitted to Secretary of State for 501(c)3 non-profit approval.

By entering the event premises, you consent to potential photography, audio recording, video recording and its/their release, publication, exhibition, or reproduction to be used for future event promotion, social media content, promotional purposes, inclusion on websites, or any other purpose by Firefly Shines and their affiliates and representatives. You release Firefly Shines, its partners and each and all persons involved from any liability connected with the taking, recording, digitizing, or publication of photographs, video, interviews and/or sound recordings 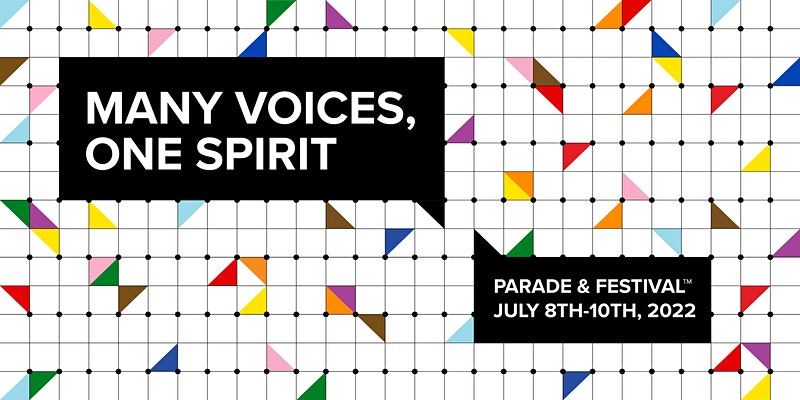 LIVE AND IN PERSON! A completely re-imagined Long Beach Pride will blow your mind for 2022. We cannot wait to celebrate with you again, and this time we’ve moved our

LIVE AND IN PERSON! A completely re-imagined Long Beach Pride will blow your mind for 2022.

We cannot wait to celebrate with you again, and this time we’ve moved our event to July to soak up those California Vibes in the warm Summer Sun.

We’ve completely reimagined our Festival and are so excited to share whats in store for 2022. Beyond headline entertainment, good vibes and great food – you’ll get to experience Long Beach Pride’s first ever roller rink! Additionally we’re curating amazing activities throughout the festival to enhance your experience and make this pride unlike anything you’ve experienced before including a Drag Makeup Station to get that face BEAT and an all new Silet Disco.

We’ve got you on the entertainment front as well. Our out of this world nightclub experience is brand new with the world renowned RELOAD crew featuring DJ’s, Lights & heart pumping bass all day in a new purpose built shaded club you wont. want. to. miss.

Feeling nostalgic? Head over to the urban stage to check out Grammy Nominated Headliner Iggy Azalea supported by tons of local urban acts to keep you moving and grooving by the beach.

If Latin acts are more your style, be sure to catch Fiesta Caliente Stage Headliner Natalia Jiménez.

We are dropping more surprises between now and the show but dont sleep on this opportunity because tickets are flying out the door.

This event *WILL* sell out so take advantage of our early bird pricing and be the first to hear of our full lineup – to be announced at a later date. We can promise you DO NOT WANT TO MISS THIS!

All Military and Veterans with ID: $15 per day for GA, available at the Box Office 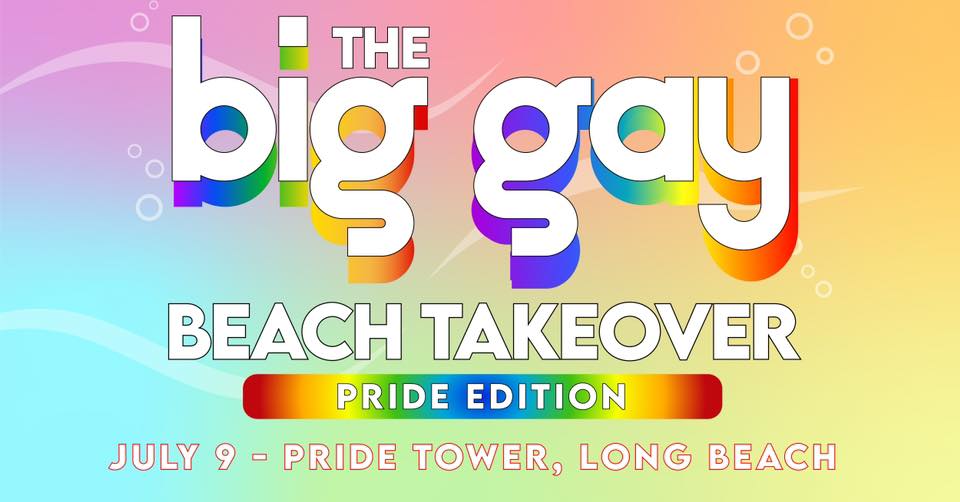 The Big Gay Beach Takeover is back.. and this time we’re adding a few principles inspired by burning man and it’s amazing community. Radical Inclusion:

The Big Gay Beach Takeover is back.. and this time we’re adding a few principles inspired by burning man and it’s amazing community.
Radical Inclusion: We welcome everyone!
Communal Effort: We create and value cooperation, be part of the greater good.
Leave No Trace: Respect our city, our beaches and the environment. We are committed to leaving no trace. We clean up after ourselves and endeavor, whenever possible, to leave such places in a better state than when we found them.
Participation: We encourage you to volunteer, work and play! It is through actions that we make a world a better place. Be part of it.
Immediacy: Live in the moment, experience the world around you. No idea can be substitute for experience.
Radical Self-Expression: Be your most athentic self! Give the world the gift that is you, come as you are, be who you are, express who you are.
Gifting: Give because you care, not because you are expecting something in return. A gift can be anything from a hug to a physical object, give because it’s about the greater good. It’s about love.
Note: The principles are meant to be a sort of guideline to help us all have a great, fun, safe and a true community event.

We will have a contingent in the 2022 Long Beach Pride Parade. Cosplay encouraged but not required. We’ll have a banner and flags. There wasn’t a ‘Parade’ category so I

We will have a contingent in the 2022 Long Beach Pride Parade. Cosplay encouraged but not required. We’ll have a banner and flags. There wasn’t a ‘Parade’ category so I chose ‘Party’. 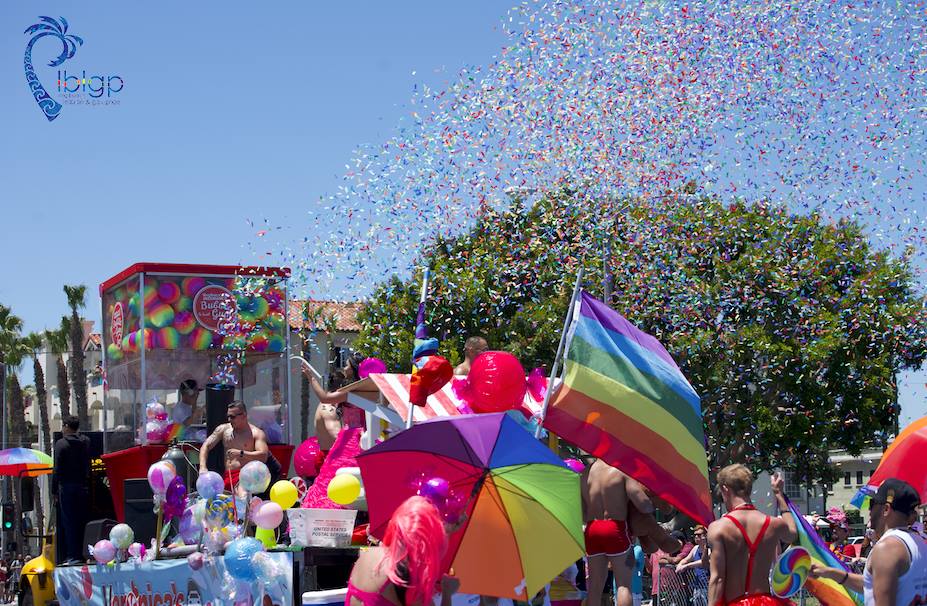 Please join in to celebrate the 39th anniversary of Pride Festival and Parade. The parade hot spot kicks off at 9:30 a.m. at Bixby Park, located on Ocean Blvd at

Please join in to celebrate the 39th anniversary of Pride Festival and Parade. The parade hot spot kicks off at 9:30 a.m. at Bixby Park, located on Ocean Blvd at Cherry Ave. The location provides plenty of shade and a community gathering spot for anyone watching the parade. Also, free seating is provided on the bleachers. Parade Step off is Ocean Blvd. and Lindero Street. 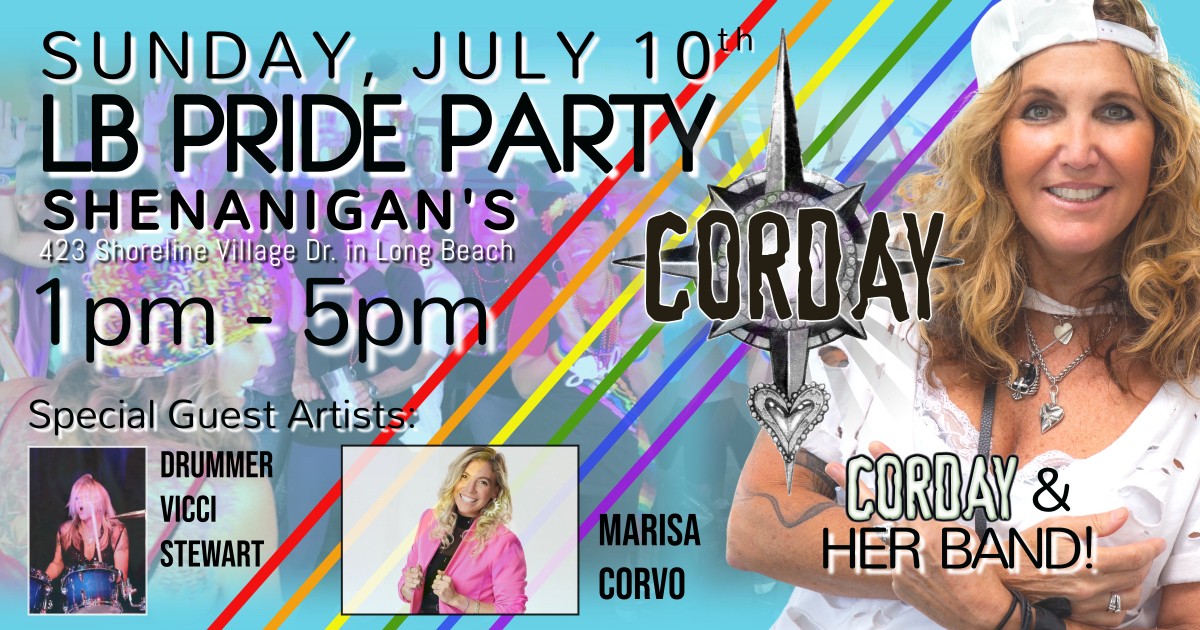 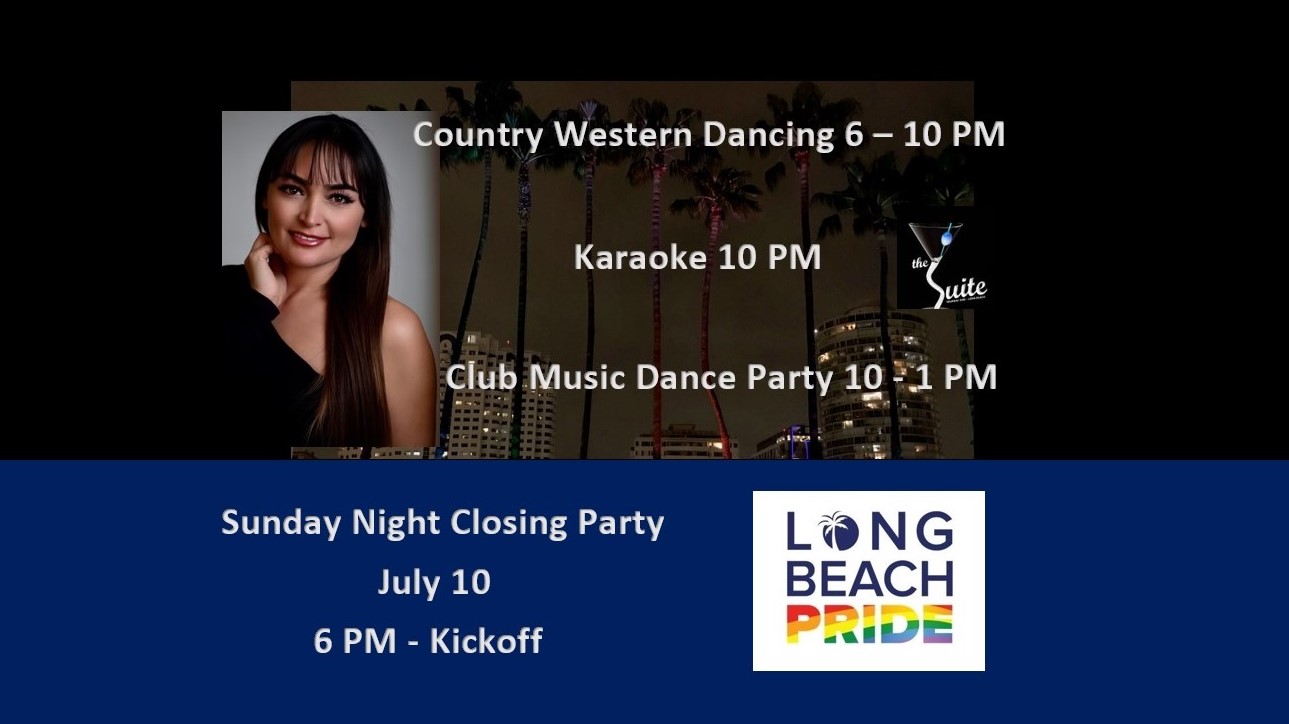 Join us for Gay Pride Party Staring with Country Western at 6pm, followed by Karaoke at 10pm & Dance Party Club Mix at 10pm.

Join us for Gay Pride Party Staring with Country Western at 6pm, followed by Karaoke at 10pm & Dance Party Club Mix at 10pm.