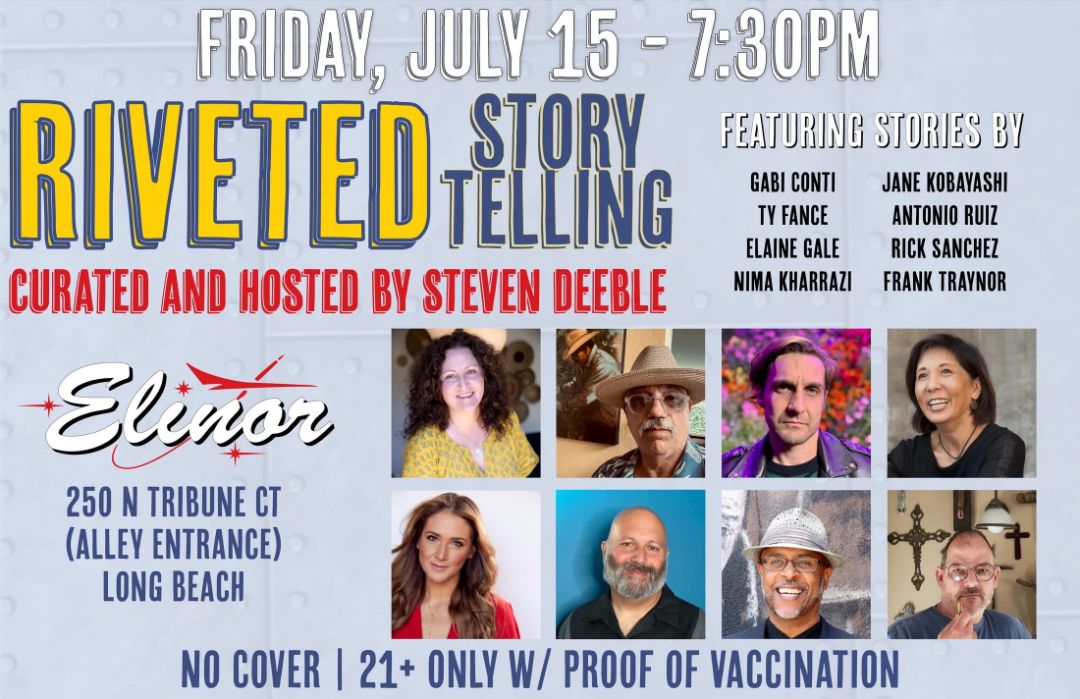 Curated by Steven Deeble. For bio and more info about Steven visit:

downtown Los Angeles. He is frequently seen on The Moth stage and at

Speak.Easy. He also hosts and curates his own storytelling show at

Frank Traynor was born and raised in Buenos Aires, Argentina. He is a

comedian, a musician, an award-winning copywriter and a two-time

StorySLAM winner at The Moth. He will soon start producing “Funny you

should ask!” a comedic storytelling show at The Crow in Santa Monica.

You can find his music, comedy and stories on Spotify, Youtube and all

streaming platforms. He will eventually be survived by his wife, two

of Design in Pasadena, where she has also taught. She has 24 years of

design experience, 17 of them with her own design firm, 5D Studio, based

in Santa Monica. A life-changing experience in 2017 prompted her to

begin to challenge herself in new ways. The story of that experience and

is the subject of her debut as a storyteller.

Nima Kharrazi has performed at The Moth, Mortified, and RISK. He comes

podcasts like Breaker Broken, My Gastric Sleeve, and the upcoming

Ty Fance has been a featured storyteller at the National Storytelling

storytelling festivals, as well as Ubuntu Storytellers. He has performed

at the Story Salon, Tales by The Sea, Story Worthy, The Otter Story

Hour, Better Said Than Done, and Strong Words. He also produced a long

Ty’s stories feature his journey into and through fatherhood;

reflections on marriage; and his colorful childhood. His stories are

also featured in his book of autobiographical short stories entitled

‘Off My Head and Over the Fence’. He wrote and directed a short film –

‘Chump City’, about a young man’s struggle to fit in after moving to

published by Chronicle Books, available wherever you buy or listen to

books. She is the co-creator, co-executive producer and host of the

podcast ‘Am I Dating A Serial Killer?’ the entire first season is

available only on Audible. She hosts and reports entertainment news for

Hollywire on SamsungTV, Snapchat and YouTube. She has contributed to

Gabi’s live show is called Storytasting. She co-hosts and co-produces

advice columnist and pop culture reporter for the Star Tribune in

and Writing Center Director for the Graduate School of Leadership and

Change at Antioch University. She has an MFA in Creative Writing from

Antioch University Los Angeles and a PhD in Human Communication from

University of Denver. She is a member of the performance troupe ‘Anima’

and has performed her solo show, ‘One Good Egg’, in the United Solo

Theater Festival in New York City. Her work has been published in

and in mainstream magazines including W, Entertainment Weekly,

Cosmopolitan, and Good Housekeeping, despite the irony.

ex-junkie-alcoholic who has stumbled through more careers than is

Throw in stints as a jewelry vendor, a motorcycle courier, and an

airport shuttle driver, then top it off with bartending in a German

alpine-themed bar, and you might wonder when he had time to sleep.

Antonio returned to college after fifty years, graduating from Long

Beach City College in 2021 with an AA in English. He is currently

He writes a weekly blog at antoniopedroruiz.com, called ‘On Second

Get riveted by stories from these locals while you enjoy hyper-local and woman-made beer, wine, cider, hard booch, and soft drinks.